Robert jarvik has been married twice. Jarvik has a son and daughter with his first wife

Physician and inventor Robert K. Jarvik helped design and build for the first artificial heart used in a human being. He is also the founder of Jarvik Research. where he began work on the Jarvik 2000 Left–Ventricular Assist System. He holds numerous patents for medical device technology.

In the year 1950,the first artificial heart for humans was developed and patented but it wasn’t until 1982 that a working artificial heart, the Jarvik-7, was successfully implanted in a human patient.

Robert Koffler Jarvik was born on 11 May 1946, in Midland, Michigan, to Norman Eugene, a surgeon, and Edythe (Koffler) Jarvik. He was raised in Stamford, Connecticut.

As a youngster, Jarvik’s early interests included mechanics and medicine, and both would greatly influence his life’s work. A tinkerer, he enjoyed taking things apart and then reassembling them to better understand how they worked. In his teens, Jarvik would watch his father perform surgeries in an operating room. This exposure sparked an interest in the design of surgical tools, and Jarvik obtained his first patent before he even graduated from high school, for an automatic stapler that freed physicians from having to manually clamp and tie blood vessels during surgeries.

Jarvik is a graduate of Syracuse University. He earned a master’s degree in medical engineering from New York University.

After his father developed heart disease , however, he felt necessary to change his educational and career direction. His father developed an aneurysm and was operated on by heart surgeon Michael DeBakey. DeBakey became well known as the creator of the mobile army surgical hospitals, or MASH units. By Dr. DeBakey’s example, Jarvik was encouraged to change his major to pre–medicine, and he signed up for the appropriate course work. His father’s heart disease would also later lead him in the direction of artificial heart research.

But, in the meantime, Jarvik was having some trouble realizing his immediate dreams. After he graduated in 1968 with a bachelor’s degree in zoology, his medical plans were thwarted by his grades, which were inadequate for acceptance in an American medical school. By Jarvik’s own admission, he was rejected by about 25 different medical schools in the United States. 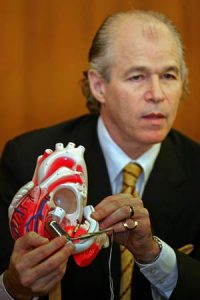 Disappointed but undaunted, Jarvik enrolled in medical school at the University of Bologna in Italy. He returned to the United States after two years, however, choosing a direction of study that combined his medical ambitions with his mechanical interests: He enrolled in New York University and worked toward a degree in occupational biomechanics. He received his M.A. from the university in 1971.

After graduation, Jarvik worked at a surgical supply house, but he still harbored hopes of becoming a doctor, so he applied for a job with the artificial organs program at a division of the University of Utah in Salt Lake City. He expected the experience would help him to gain appearance into an American medical school.

Jarvik worked as an assistant design engineer to Willem Kolff, the director of the university’s Institute for Biomedical Engineering and Division of Artificial Organs. Kolff was considered the leading authority in the field and helped pioneer research on artificial hearts. During World War II, he developed the first kidney dialysis machine. In the mid–1950s, he began work on developing an artificial heart, which became the primary goal of his division at Utah in 1967.

Physicians and scientists then began to consider the possibility of creating a permanent, rather than temporary, implantable heart model. Jarvik’s permanent design was the first of its kind in the year 1982.. He called the artificial heart the Jarvik-7.

The Jarvik-7 artificial heart was developed by American scientist Robert Jarvik and his guide, Willem Kolff.

Dr. Robert Jarvik is generally known as the inventor of the first permanent total artificial heart. The new Jarvik 2015 15mm is the smallest VAD available today.

Some quotes, that said by Robert jarvik…….

“I am a pharmaceutical scientist, not a actual physician. I think it’s very upfront. I am a doctor. I have long experience with heart disease.”

I do not exercise clinical medicine and thus do not treat individual patients. My career is in medical science.

There is a point to be noted that I am not a rehearse physician. I have never been a practitioner; everyone has known for decades. I am a developer of the technology.